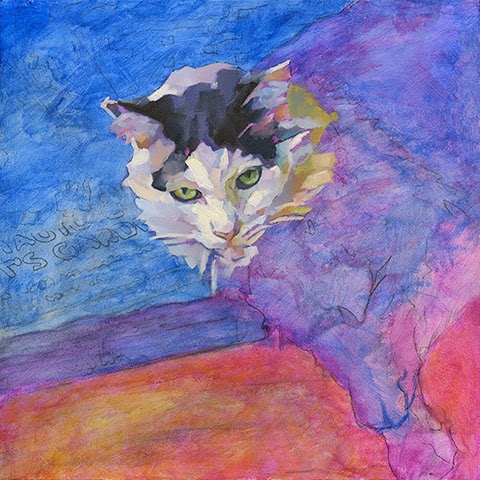 Actually, I never left, but my computer did. It’s been enjoying a little vacation time at Simply•Mac, but now it’s back at home, on my desk and ready to get back to work, allowing me to start posting again. Woo-hoo!

I’ve been working on another Ray-lounging-amongst-the-books painting, and below are the progress photos thus far. 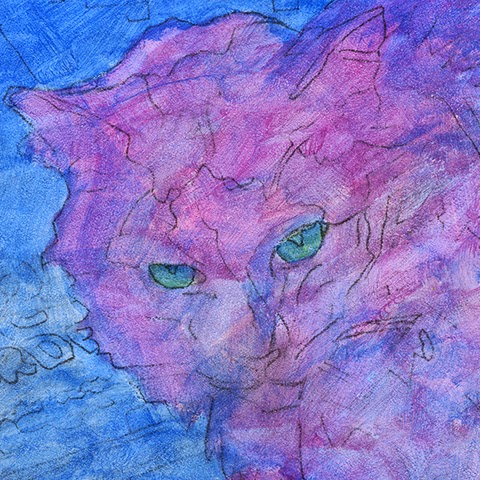 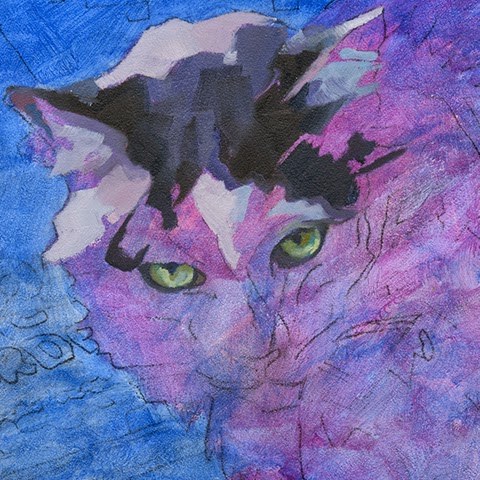 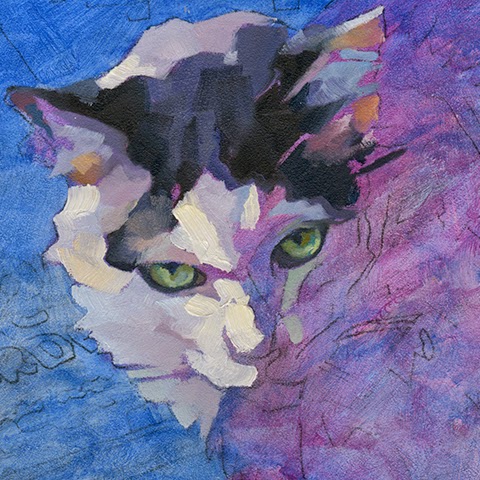 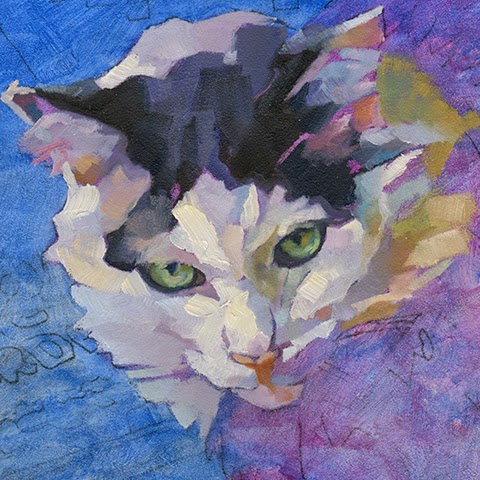 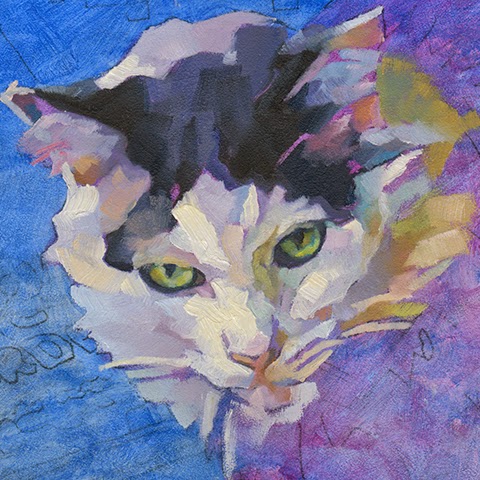 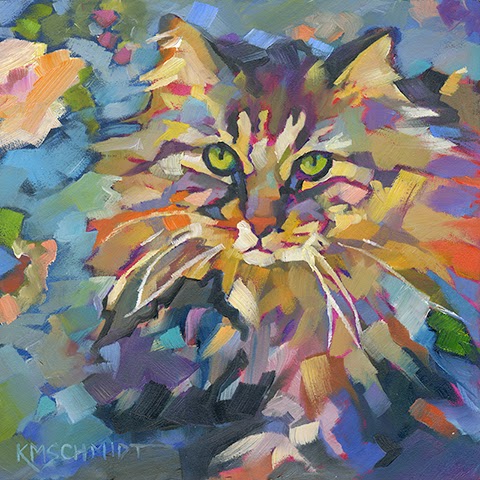 Here’s my friend Ramona’s tortoise-shell tabby, Biscuit. The third of my paintings over the last few years to feature her. It’s always such a joy to paint Her Fluffiness.

Well, Pantoufle has graduated to eating on his own; no more bottle feedings. Aaaww … and woo-hoo! (that’s both a sad face AND a happy face.)

For all our English-speaking friends who have been questioning how to pronounce his name, it’s not difficult. It’s easiest to think of the “le” at the end as silent, so just say, “pon-TOOF.” If you want to be a stickler and pronounce it the French way, each syllable has the exact same emphasis, and there is a very subtle touching of the tongue to the roof of the mouth at the very end.

For the last little while, Pantoufle and Jo have been playing hide-and-seek on my desk. 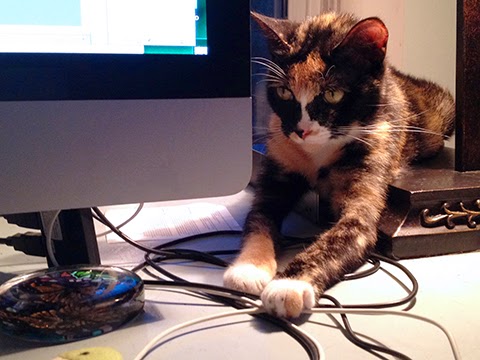 Now Jo is waiting for Pantoufle to come around to her end of the computer. 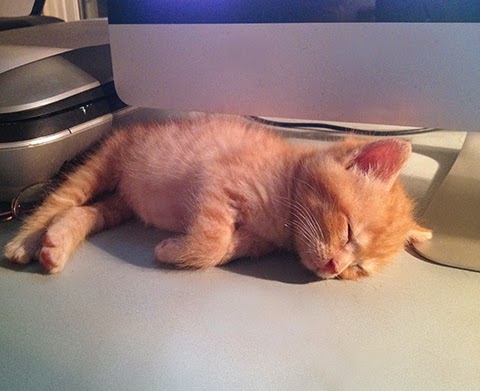 I think she’s going to be waiting for a bit longer.

Posted by Karen M Schmidt at 10:35 PM No comments: 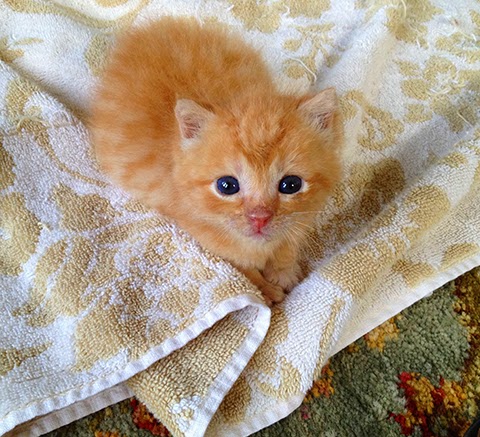 Meet the newbie (only one of several reasons it’s been so long since I posted a new painting): Pantoufle (French for “slipper”). Named after the Chocolat character, which in the book was an imaginary rabbit, and in the movie was an imaginary kangaroo. The last time we watched the movie, at the end ...

… when Pantoufle, his foot all healed, goes hopping off to his next adventure, Paul said, “I think we should name our next pet Pantoufle, whether it’s a cat or a dog.”

Well, that was nearly a year ago, and recently when our friend Lyn was trying to find homes for some abandoned newborn kittens that she found under her lapidary studio behind their house, we chose to adopt this little guy, whom Lyn nursed until he was four weeks, then we took over. Ever since our Ray passed away last December, Jo has been a little lonesome for some feline company, so we had actually been on the lookout for a new little brother for her. I say Lyn had the hard part (with help from hubby Al): round-the-clock feedings every two hours, keeping the kittens warm, bathing, etc.

Then last week we took over just when Pantoufle was on the threshold of Total Cuteness.

He is growing so fast and learning exponentially. A week and a half ago when he first came home with me, at four weeks (estimating his age based on when his eyes opened), he was just a baby. By the end of last week, having reached the weight milestone of one pound, he was a toddler, and first started eating solid food along with his bottle. Now he’s a kindergartner, and next week he’ll be entering elementary school. Wooosh!

Below he’s proudly showing off his kitty cave. He’s been asking for a teeny wide-screen TV to hang on the wall so he can watch Animal Planet. 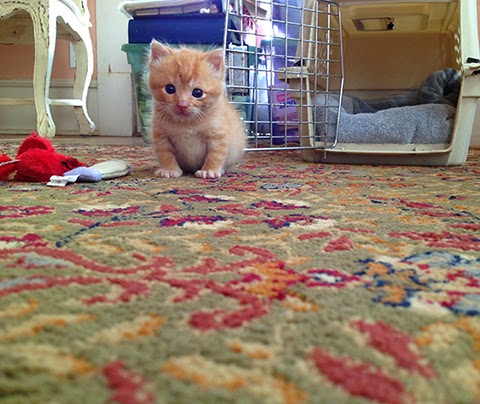 This is my kitty cave. There are many like it, but this one is mine.

The first few days, when Jo still had mixed feelings about her new brother (WHAT?? a new KITTEN?? wait a minute, you expect me to pass the Crown of Cuteness to THIS?? you have GOT to be KIDDING me!), I would shut him in for nighttime sleeping for his own protection. Now Jo has decided that she will at least tolerate the new kid (I guess he MIGHT be fun to play with. And I guess he does look KINDA cuddly … whatever.) so I leave the door open all the time and now Pantoufle goes inside of his own volition whenever he feels a nap coming on, which these days is quite often.

Not like Jo who is all grown up and now only sleeps 22 hours a day.

Here’s Pantoufle doing battle with a shaft of morning sunlight: 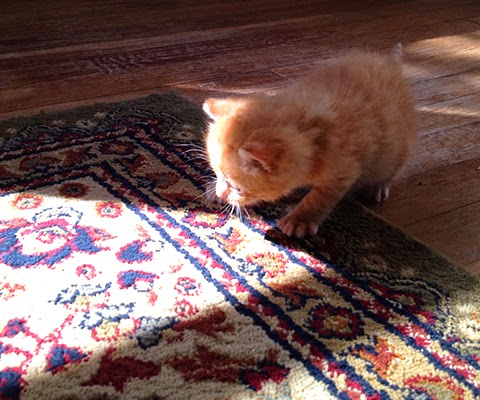 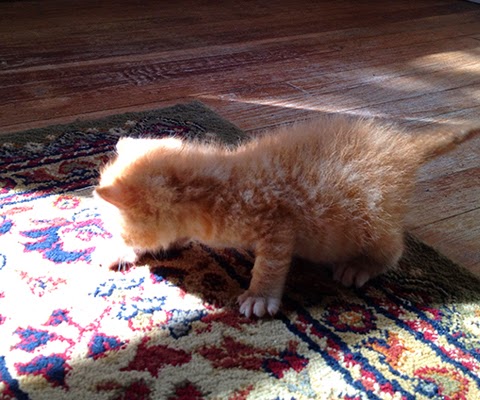 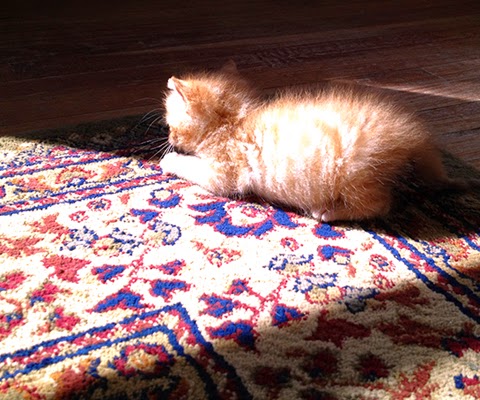 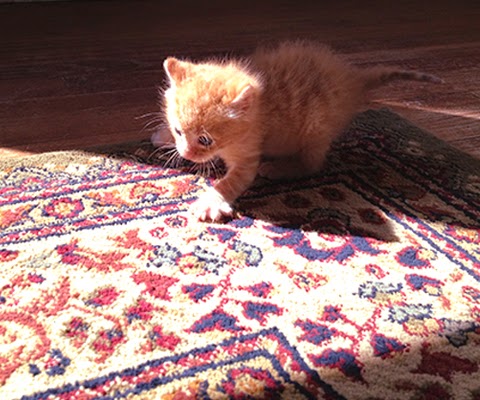 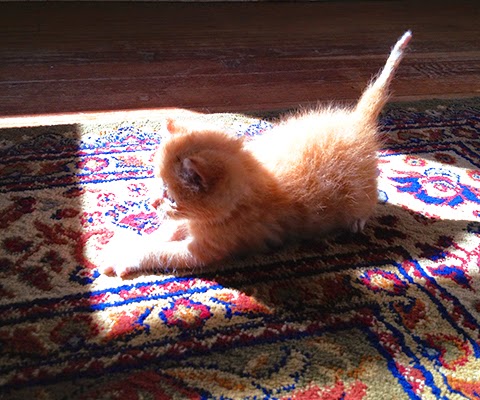 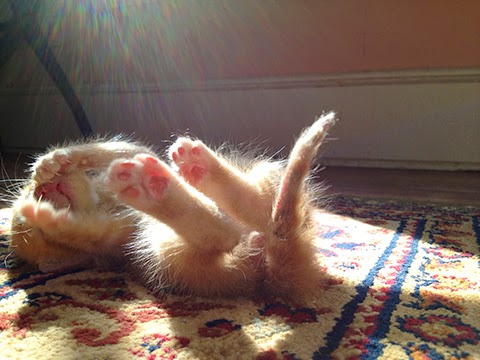 Prepare to meet your doom as I unleash my Paws of Fury!

And here he is after the first time I gave him a bath: 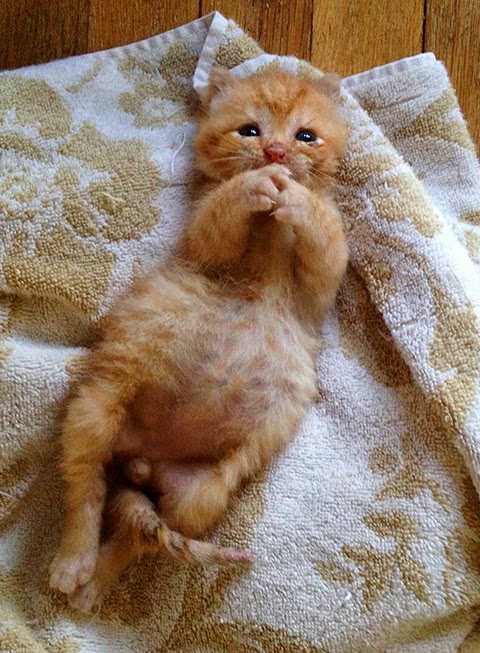 My diabolical kitty plan is working purrr-fectly;
they are hopelessly falling for my irresistible cuteness --
eggscellent … EHGGGs-cellent! 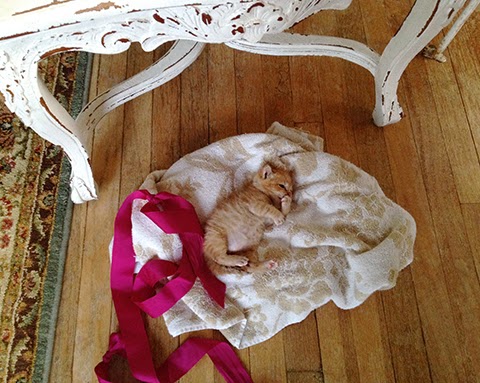 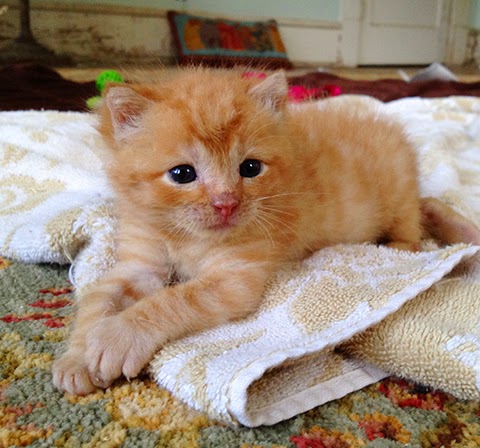 Kicking back and chillin’ at the wrap party after the first official studio kitty photo shoot.

I have the distinct feeling that in the future you will be seeing
more than a few paintings featuring Pantoufle.

He has assured me the fame will not go to his head. 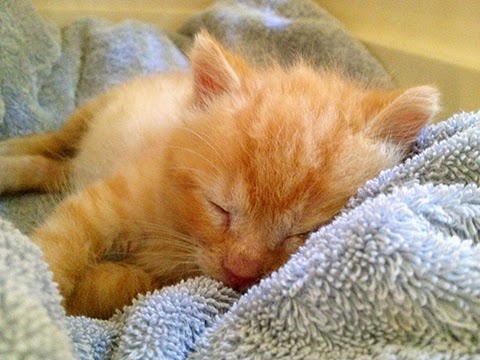