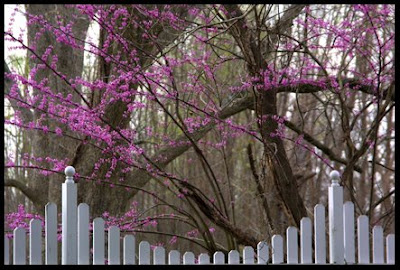 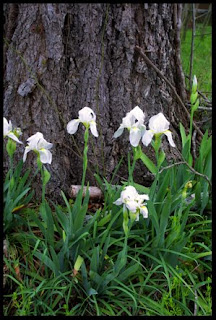 For the last couple of weeks I've let various responsibilities and projects (and beautiful spring days!) keep me too much away from the studio, but now I'm back and working on some larger landscapes.

I'm excited to let you know that giclée fine art prints of my previously sold pieces will soon be available for purchase (possibly by the end of this week!)

I've also been working on my new website. It's still a work in progress, but check it out and let me know what you think! 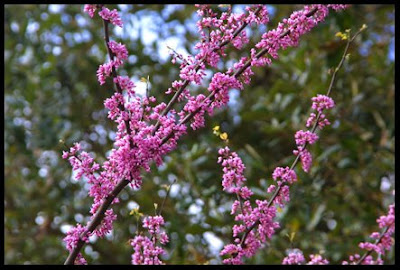 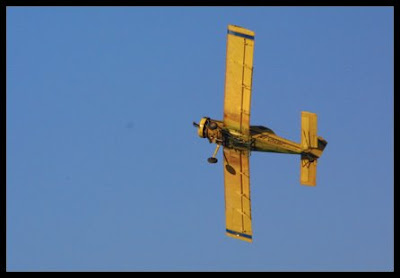 He’s been buzzing the fields all around us for a week or so. When he was working right across the road from us, I took these photos from our front balcony. 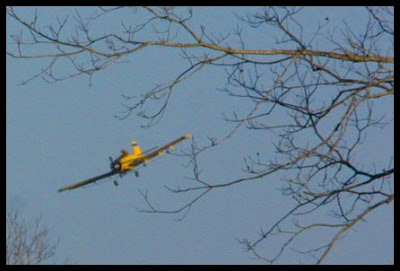 He was so close! Almost right in our front yard! 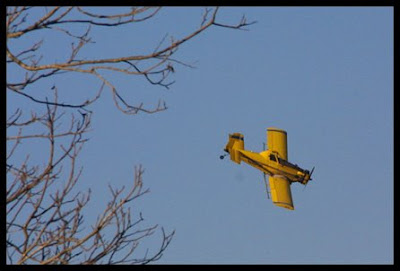 This guy is so much fun to watch. He’s a real daredevil. Once when I was walking down the road with the dogs, I stopped for a while to watch him flying back and forth. Again and again he would turn sharply, so that the plane was perpendicular to the ground, then he’d level out and swoop back down over the corn field. 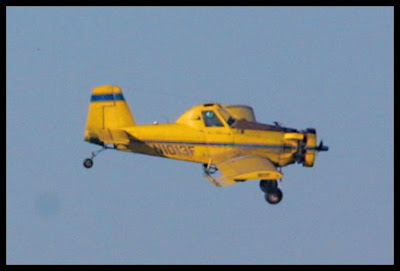 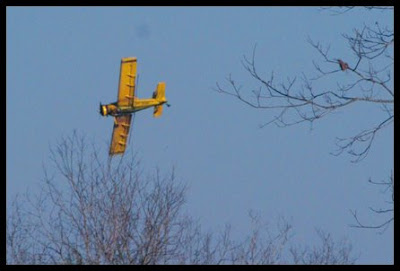 A couple of times I caught myself holding my breath as he headed straight for the line of trees bordering the corn field, pulling up just in the nick of time, clearing the topmost branches by scant inches! Whew! Then he’d turn around and head back down, again just missing the treetops. 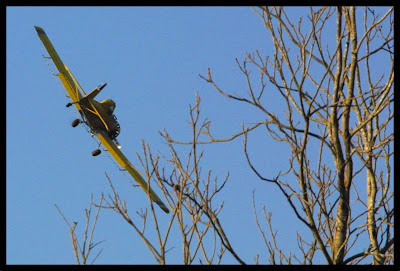 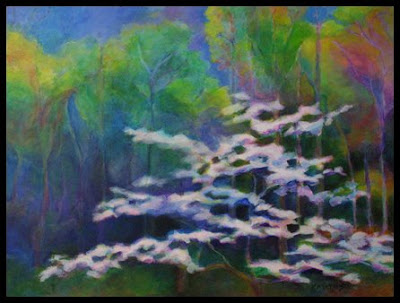 Well, only 11 more days 'til spring is officially here. The dogwoods are not quite in full bloom yet, but I so look forward to them every year. I love the white ones. Here's a painting I did several years ago of one of my favorites, growing in the beautifully landscaped gardens of the Norton Art Gallery in town. This link may take a long time to come up, but it's worth it to see the panorama of azaleas, which will start blooming in just a week or two, I think!

The background of this painting (everything except the white blooms) is entirely made up of layers of transparent color glazes, which has the effect of making even the darkest areas look luminous.
Posted by Karen M Schmidt at 10:40 AM No comments:

Blessed are the peacemakers ... 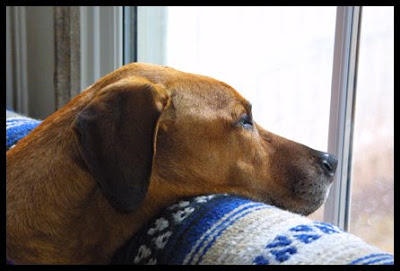 I know, I know, it's been over two weeks since my last post. Hey, man, I've been busy!

Pictured above is Ryan, aka Max, a sweeter-than-honey 70-lb. Greyhound / Great Dane cross. You're not going to believe this, but a week ago Saturday night Ryan showed up at our back door looking very hungry. I put some food out for him, then a while later I saw him still out in the front yard, and remembering that it was supposed to get below freezing that night and the next, I couldn't stand to leave him out there, so Paul and I invited him in and he made himself right at home. We didn't know his name then, so we started calling him Max.

Even though he didn't have a collar we could tell right away that he had to have been someone's pet, because he was so gentle and sweet natured, plus he had been neutered. All the other dogs were already nestled in their beds (Buster, Matilda, Blue and Sophie in the breakfast nook and Trixie and Henry in the living room) so we made a bed for Max in our room by throwing an old blanket over the love seat. (When we took him to the vet on Tuesday, all the techs were laughing about the new Schmidt dog. They said it's like we have a big flashing sign that says Welcome, Stray Dogs).

By Sunday afternoon we had discovered Max knew Sit, Stay, Shake, Lie Down and Ball. He knew how to play fetch with a tennis ball, he ignored the cats, and whenever we would offer him a treat he would take it ever so gently from our fingers. What a great dog! I knew we had to try to find his owners, because surely they were missing him terribly.

One by one we let the other dogs except Henry out to meet Max, and he integrated perfectly into the pack. But here's where the story gets complicated, so bear with me. 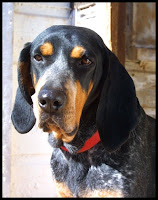 One morning several months ago, Henry all of a sudden, out of the blue, took an intense dislike to Buster. I mean, one second everyone is getting along fine, and the next Henry attacks Buster in a fury. We were flabbergasted, and it surprised Buster, for sure. Then Matilda came to Buster's aid and Trixie started barking her head off and it was just a whole chaotic thing. 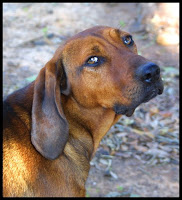 We finally got Buster and Henry apart and into separate quarters with no bloodshed, thank goodness. But ever since then Henry would only tolerate Trixie and Matilda, but since Matilda and Buster can hardly stand to be apart from each other, Trixie has been Henry's only canine company (whenever she's not out playing with the others).

So for the last few months, we've kept Henry apart from the Buster family, letting the two factions take turns spending time out in the yard. Occasionally we would try re-integrating Henry back into the pack, but he wasn't one bit tolerant. And now he was even starting to get willful with us, not wanting to stick to the rules. Even growling at us. NOT acceptable.

And now that the weather is getting nicer, I said to Paul that it sure would be nice if everyone could just spend all day outside together. It would make things so much easier. Plus I hated that we had to keep room doors shut all the time to make sure Henry and Buster didn't see each other. It was getting so bad that we even laughingly talked about calling the Dog Whisperer to help us get things back to normal.

Then along came Max, the gentle giant. 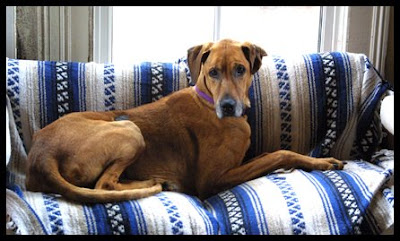 As I was saying, Max quickly became part of our happy little pack, including Trixie. Everyone wrestling and playing chase, racing around the yard, taking naps together in a big pile. Everyone but Henry.

THEN, sometime Monday afternoon, on Max's 2nd day with us, I accidently left the door open when I went out into the yard and Henry comes racing out, teeth bared, barking his head off, heading toward Buster. Well, Max wasn't going to have that. Like lightning he was all over Henry, pinning him down on his back, baring his teeth, snarling and barking furiously in Henry's face. Henry didn't know what hit him. He was like, what the heck??!!! He ran back in the house with his tail between his legs, and Max let him run away and became the gentle giant again. It all happened so fast, I was just standing there with my mouth open. I went into the house to see if Henry was ok, and he was just sitting in the hall, staring at the back door.

A few hours later he acted like he wanted to go out again, so I put him on a leash and went out with him. He started to growl at Buster, but Max trotted over and growled at Henry and he immediately backed down. Then after a few minutes everyone relaxed and I let Henry off the leash. He just stood there with his tail down and one by one all the others came to him, wagging their tails and tentatively touching noses to Henry. Very gradually Henry's tail unwound and he started sniffing around the yard, ignoring all the other dogs.

After this, Henry was a changed dog. He didn't go after the other dogs any more, he was relaxed, and he was even humbly obedient with Paul and me. Amazing.

Over the next few days we talked about how to go about trying to find Max's owners. We decided that on the following Monday (today) we'd put an ad in the paper for week. And put flyers up at the veterinarians and shelters. And even though he's a great dog, we said if we can't find his owners we'll try to find him a good home, because we just can't have seven dogs. Nope. Six is the limit.

Well, Saturday afternoon while my parents were visiting, we heard a knock at the back door. It turned to be one of our down-the-road neighbors, Chris, who had helped us rescue Buster and Matilda last year. He said, "Hi! One of our dogs has been missing since last Saturday, and I think he's in your back yard!" Boy was I glad to see him!

Chris was on his motorcycle, so he went home to get his truck and 12-year-old son, and they were back within 5 minutes. We found out Max's name is really Ryan, and he was as happy to see his owners as they were to see him. It was a great reunion. So we said a fond good-bye to Max/Ryan after having him as a member of our family for one week.

Afterwards, I wondered if Henry would remain the same with Max/Ryan gone.

And so far, so good. Henry still humbly gives Buster a wide berth when they're out in the yard together, and Buster is very relaxed with Henry around. Henry and Trixie still get to come inside to sleep, but during the day they get to spend most of the time outside in the beautiful spring weather with all the others. Our household is one big happy, peaceful family once again.

Thanks to Max. I mean Ryan. 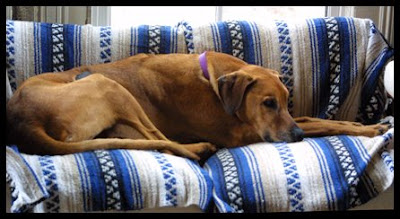